Record and victory of Simone Faggioli at the 43rd Cividale Vastelmonte

The Cividale-Castelmonte was the only four-wheel event organized in the region in 2020 and Simone Faggioli the multi-champion confirms the leadership of the Friulian race, fifth in CIVM, even after a complaint presented by his opponent Merli. It was not a race like the others. The 43rd Cividale Castelmonte has reserved numerous surprises for Faggioli, Best Lap standard bearer.

The strong Florentine driver managed with his M20 FC Zytek Pirelli standard to work in the midst of an insidious climate characterized by rain and humidity, setting the best time of all the test and race climbs, as well as the new track record, in a demonstration in the one who hadn’t participated in over ten years. With this performance Faggioli climbed to the first step of the podium against Christian Merli in Osella FA30 and Federico Liber, third overall, in Gloria C8P. Merli, however, at the end of race 2, complained to Faggioli’s car, which after more than nine hours of verification, in the middle of the night, was declared fair in all respects indicated by the opponent. 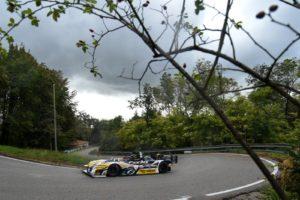 Simone’s voice is understandably tired, but the satisfaction seeped in anyway: “I’m very, very happy. This complaint gave us the opportunity to demonstrate our consistency to those who doubted it and, therefore, to affirm the objective value of our results. In this regard, I am happy with Christian’s complaint although, on a human level, I regret that he thought that I could compete under weight or with a higher displacement engine to win … but now I don’t want to think about it. At this moment I am happy because the answer to the complaint clears up the doubts about my performance, which are only the result of so much work and sacrifice to be able to overcome an opponent who has often beaten me encouraging the team to seek the maximum performance with me. I really must thank my guys and all the technical staff that unite us, as well as Nova Proto, who followed the complaint until the night sent, and the stewards, the members of the race organization and all those who have been willing to support me even To recharge my phone, I ran out of battery. I felt a great positive energy, which did us good and without a doubt strengthened us. A special credit goes to Pirelli, who gave us excellent tires as the victory also came thanks to them. Now preparing for the challenge of Erice trying to give everything possible to defend the first position of the CIVM conquered yesterday. “

Advertisement cookies are used to provide visitors with relevant ads and marketing campaigns. These cookies track visitors across websites and collect information to provide customized ads.

Analytical cookies are used to understand how visitors interact with the website. These cookies help provide information on metrics the number of visitors, bounce rate, traffic source, etc.

Performance cookies are used to understand and analyze the key performance indexes of the website which helps in delivering a better user experience for the visitors.